Eh? Who the heck are you? Where'd our BocchiP go?

Ahh yeah, well, BocchiP is taking a day off today - look forward to him next time! Who the heck am I, indeed. I'd like to introduce myself: My main work in MyDearest is taking naps, egging BocchiP on to buy board games, rolling gacha, eating sweets, and bringing in board games.

Apart from doing all that hard work, I also sometimes maybe work on Tokyo Chrono, or maybe not. This being the first development-focused entry in the reports, I'll be talking about how we make the conversations and other event scenes in Tokyo Chronos.

As a given, the entire game's development is done in Unity. For those not familiar to game development, in a nutshell, Unity is software that lets you create games and videos and images. 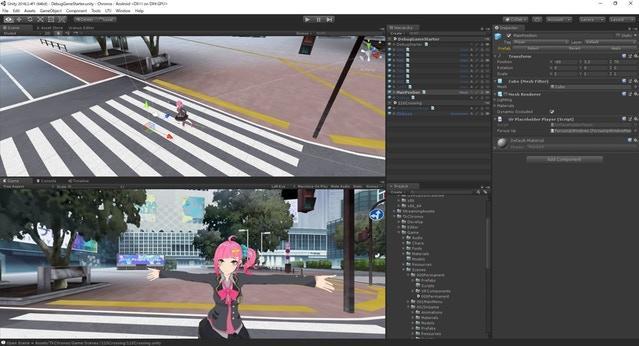 I'd love to jump right into the conversation scenes, but before that, I'll need to touch on the kinds of things we need to make for those first. Here are the bare minimum things needed to create a conversation scene in Tokyo Chronos: 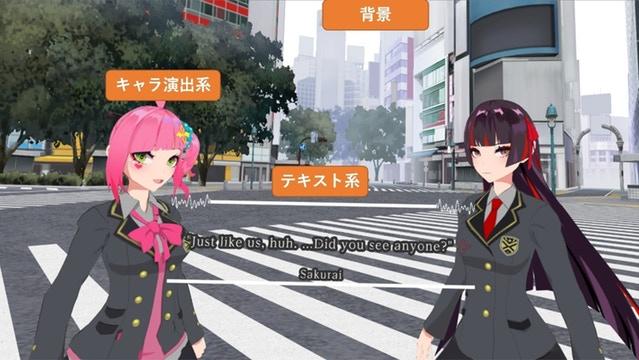 There's a bunch of other details that need work as well, but that's more or less what's needed to visualize the scene. Now that we have an idea of what we need, let's take a look at the process of how to actually put one together.

When creating the conversation scenes in visual novels, novel games, ADV games, and whatnot, there are a variety of ways to go about it. Here are a few examples:

・Using a general language (Lua, Squirrel, etc., which are used in applications outside of visual novels)
・Using a language specifically made for visual novels (NScripter, Kirikiri, etc.)
・Using a visual novel creation software (TyranoBuilder, Novel Tsukuuru, etc.)
・Filling up a sheet in Excel

Whichever of these is most fitting depends on the situation, so there's no absolute best approach. Let's take a look at the pros of each one.

The first approach we tried is creating with Excel. Unity has this tool called "Utage", which allows you to create novel games through Excel. It's fairly easy to use, and Excel itself is quite simple to operate, so we tried to learn how to use that. Part of the reason could, also, maybe stem from how everyone the Japanese video games industry seems to have this obsession with Excel.

We tried to make a sample scene in Excel, which turned out like this:

Converting that test scene into an actual in-game scene gave us this:

It's the pink dude from a few development reports ago!

As for the reactions to the scene made with Excel:

This is the combined opinion between me, KashiwakuraD, BocchiP, and the dude who made the god-tier song for the trailer.

Now as for what exactly made Excel so hard, here is a list of reasons:

・Staring at Excel's screen is suffering!
・It's hard to visualize the information written in the Excel file as a 3D space
・You need to look in the VR environment to make adjustments, but switching from Excel to VR and back is tedious
・I'm so sick of seeing Excel, please... _:(´ཀ`」 ∠):_

Among others... Our conclusion was that if it's a 2D game that contains all the visual information within one fixed frame, then we could make it work with some imagination. In a 3D space - a VR space, no less - then it's hard to adjust how everything looks. And it's also just not easy on the eyes...

Well, what then? A GUI that lets you adjust settings in-window would be good.

Excel didn't quite work out for us, but the pink dude era let us experience a failure, which allowed for us to have an idea of what we wanted from here on.

Don't worry - it's not yet panic mode.

Apart from the other development tools and stuff I mentioned earlier, Unity also has Timeline, a tool which lets you make videos and cutscenes, so we looked into similar tools, but there are just so many options that they were hard to use. Plus, we have be able to display text inputs, which didn't fit the tools' specifications, so we decided on not using those. 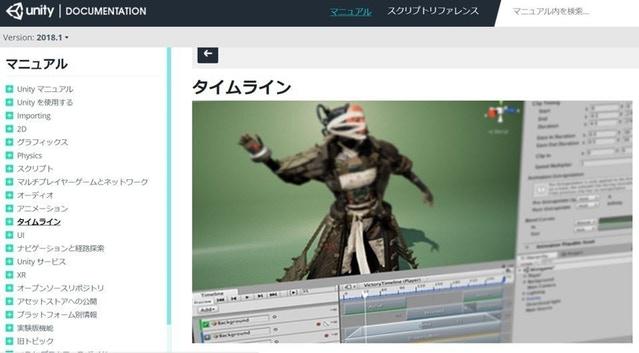 We got together and asked KashiwakuraD about exactly what environment he wanted to develop in, and we came up with the following:

Those were his basic needs. There didn't seem to be any tools that fulfilled those requirements though, so we figured that if it didn't exist, we might as well just make one. Slow and steady wins the race and all that, so we shifted work into developing our own tool.

After that very, very long prelude of a backstory on how we came up with "Uranus" - our tool specifically created to develop Tokyo Chronos - and now use it in making the game's conversation scenes and such. The column in the middle of the screenshot has character images - each one of those is considered a "command", with the text on the side being either a line of text, or some sort of motion/presentation effect. 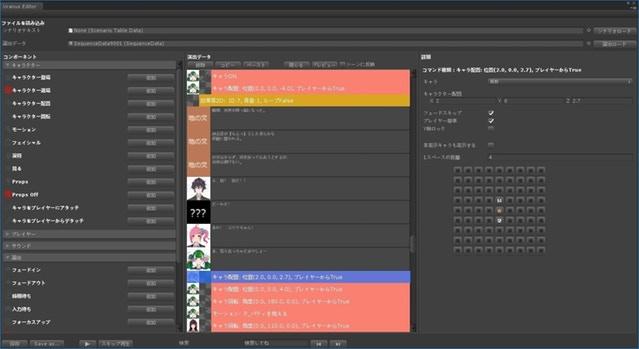 Let's go through a quick rundown of the production process. First, we have a file with the game's scenario text, so we load that in. 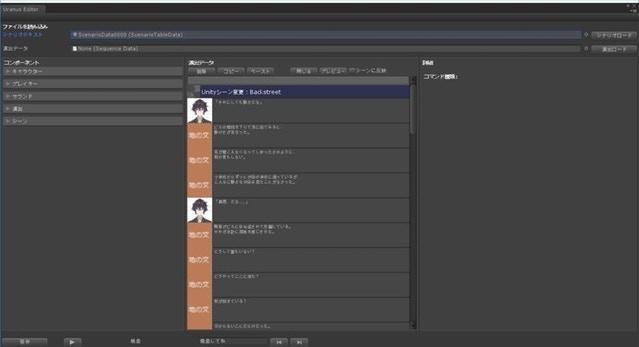 After loading it in, commands are created using the text as basis, as you can see. At this point, you can also see which bits of text belong to which character, or if it's monologue, based on the character icons.

Next, we'll add some direction into the commands. There is a list of commands available at the left hand side of the screen. Here, we'll add some commands to make other characters appear onscreen. Clicking on the "Add" button from the list on the side will insert the command to add a character in the middle list. 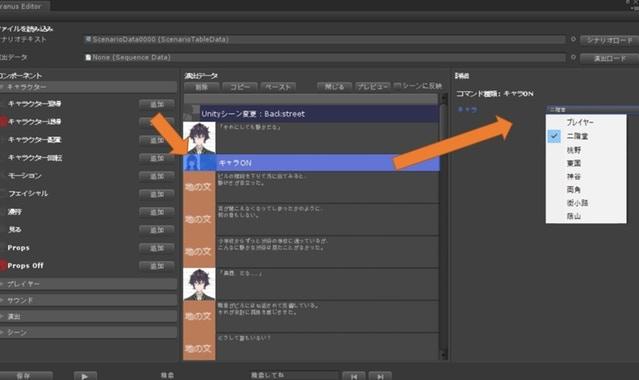 Choosing the command then allows you to change more specific details. As in the image above, we're setting Nikaidou as the character to appear.

Following this flow, we can add all sorts of stage direction, coming up with something like the first image, or this: 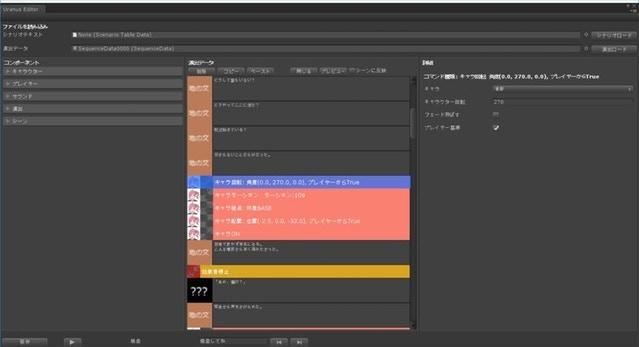 Now, we've made the commands and the flow easier to visualize, but double-checking them is still hard. Because of that, we've made it so that by selecting a command in Uranus, you can have it display exactly what's happening in that point in time within Unity.

For example, we'll select the top command in this screenshot. 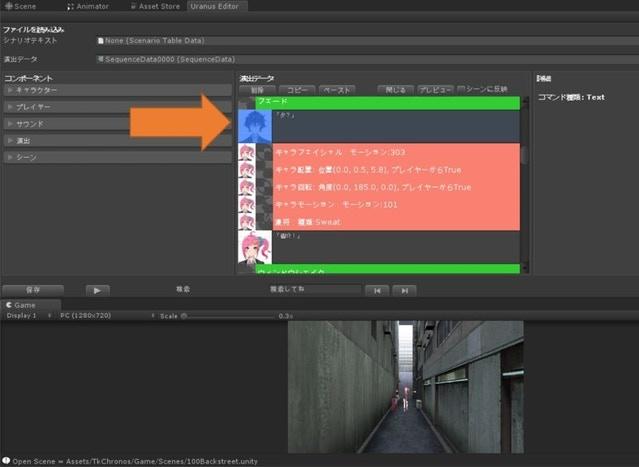 At the bottom of the screen, you can see that Momono is still far away. Now let's select the command where Momoko says her line, after her character has been re-positioned: 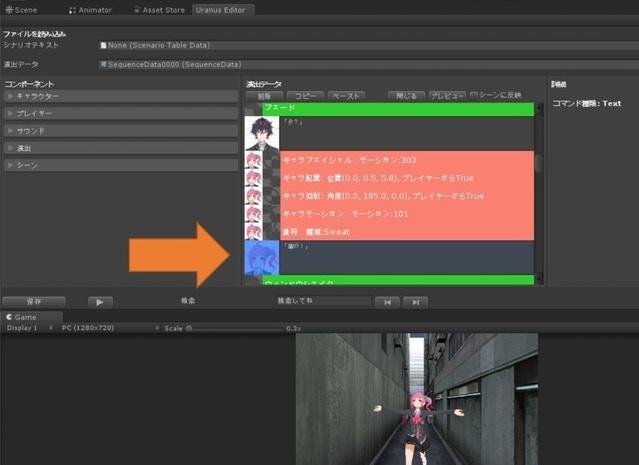 Momono's a lot closer now, as you can see. We've made it so that you can check all this out without having to boot the game up.

To explain the technology behind this, when opening it via Uranus, the tool creates a Scene specifically for the development tool, and places the game objects inside for preview purposes. When selecting commands in Uranus, you can also manipulate those objects. The characters and backgrounds use the same prefab objects as in the actual game.

Finally, when we want to boot up the game and test it, we made a specially developed replay button. Unity has its own replay button, but we also had to create one to use with Uranus's settings.

<Lots of Room for Improvement>

Now, I talk about the tool as if it's already complete, but the Uranus tool itself isn't finished either, and we continue add features to the tool as we're developing the game. It also looks pretty half-assed and unintuitive, so we'd better try to improve it and make it easier to use... Ha ha ha.

Okay well honestly we've not really been asked, so I don't know whether we can really consider this a "frequently asked" question, but this is for those of you out there who think, "maybe I could use this too?!" If there actually is anyone out there who thinks that, then thank you very much!! m_ _m

At this moment, it's currently built specifically for use with Tokyo Chronos, and not really meant to be recycled for use with other games, so it might be hard to reuse as-is. If there are a lot of requests though, maybe there's no impossibility that KichigamiP could possibly perhaps have an idea with what to do with it. If so, please keep on tweeting us with the hashtag #東京クロノス (#TokyoChronos), and maybe he'll be motivated to actually do it... Just maybe (not claiming responsibility here).

After an eternity of text, that about does it for the introduction to our development process. Now, my earlier introduction might land me in some hot water with the higher ups, so I'll do it a bit more properly this time.

That said, I'm not actually sure what to say, so I'll just write up my overall history:

2012~2015: Worked as a programmer for Square Enix's Bravely Series in Silicon Studio. Main work was the combat scenes, working with some others

2015~2018: Unemployed. NEET. In this period, I started the VR board game, "Mask of ANUBIS" working with Gift10Industry, took on a job from Famitsu to make a VR boardgame, "Ulthar no Bakeneko", and some other things.

In parallel with all that, during my time as a student, I was also creating analog, digital, and VR-based games in my personal time, and selling them at both events and stores.

This is kind of it... I think! One last thing: I'm just as alone (Bocchi) as BocchiP is, so I'm looking for anyone to play board games with! See you next week~

After I finish writing this blog, I'm gonna go to a board game café and play some board games... Ha ha ha...