The story 'til now:
https://www.kickstarter.com/projects/sekaiproject/tokyo-chronos-a-new-vr-mystery-visual-novel-game/posts/2237992

You destroyed the first prototype that showcased the characters...?! Why?

BocchiP: I'm definitely curious about why you destroyed the prototype, but first things first: you mentioned you wanted players to love the characters and hold them dear - could you talk a bit more about this?

Dir. Kashiwakura: Just turning something into VR isn't the answer to the problem. I did feel like we needed that face-to-face sensation that VR provides, but we placed importance on how to express the appeal and charm of the characters. We have the object scale in VR around 3.5 times the real life size, but we're doing it under the theory that they can look nicer this way. Perhaps we're sacrificing a bit of that sense of realism, but we intentionally try to push the charm of the characters as far as we can. How should we best show this in VR? How do we present the story here? - We're still in the trial and error phase of seeing what works best.

BocchiP: I see, I see. And so you began to create Tokyo Chronos with those concepts in mind. This screenshot is from the first development demo, yes?

This is from when the models weren't even made yet.

BocchiP: It is pretty weird to see some random pink dude onscreen (laughs). The first prototype's UI is pretty different too, right?

Dir. Kashiwakura: Yes, actually, the current prototype is Mk. 2, with Mk. 1 kinda making you just sit in a pot forcing you to read through three layers of text windows. It definitely felt more like a traditional visual novel at that stage. 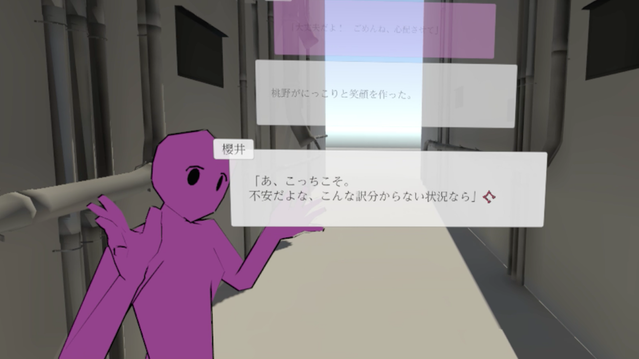 BocchiP: Mm hmm. So why did you decide to destroy this?

Dir. Kashiwakura: The old version put the text at the center of the show - we wanted to have the characters themselves in the spotlight. We wanted to give importance to the main content, the characters. They ought to be the main focus. And yes, it definitely is hard. No tricks, no shortcuts - the presentation becomes a lot less abstract. But that's exactly the kind of challenge we wanted to take with the characters.

BocchiP: That you wanted to showcase the characters in the most appealing way?

Dir. Kashiwakura: Yes, well, I love LAM's (character designer) work so I'd sent an offer. And because I love their work, there were times that I thought, this isn't right. It's not right that even though I love their work so much, I'm shoving those lovely designs off to the side in favor of some text box.

And so, I ended up simplifying the design of the window. But that also means I need to make up for that in the rest of the presentation and direction. 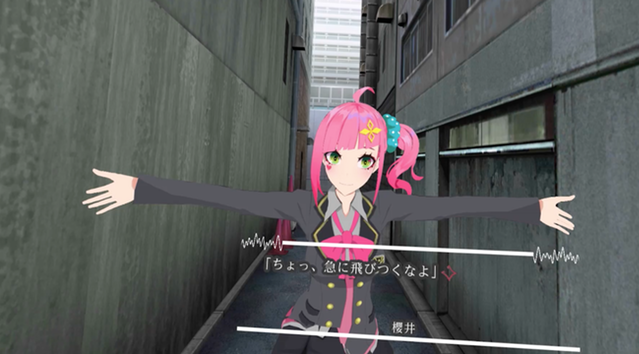 BocchiP: I see. I wonder how the prototype will continue to evolve from here?

Dir. Kashiwakura: The current prototype doesn't have much in lieu of impact in presentation; the characters are more or less just standing there. However, we're heading into the phase where we really pour our souls into it - you can see the characters with your own eyes, so we want to have them really bounce around in the screen.

Now of course having the characters visually alive is important, but we're pouring our souls into the story; the music; every nook and cranny of the game as well. We're also planning on adding some interactive game elements too. We want to take on this challenge as a whole. The UI itself will also get polished up, no doubt.

And to everyone: as fellow accomplices in the development of this game, if you have features or anything you'd like to see added, please let us know!

BocchiP: Thank you very much! If the readers out there have any comments, suggestions, or opinions, please DM us or comment! That's all for this week!

Next week, will be a special feature on VR devices for beginners! We'll focus particularly on the Oculus Go, and how it and other compatible devices will work for Tokyo Chronos. Look forward to it!

【To be continued with Development Report vol. 3: What is the Oculus Go? An Explanation of compatible VR Devices - update scheduled on 7/26 (Thu) 19:30】